The need to detect deception is not a twentieth century concept as many would guess. Instead, the need to determine an individual's trustworthiness dates back to almost 2000 BC. Many techniques for determining deception were founded, often based on superstition, or the belief that a religious God would allow the truthful to prevail.

One of the earliest forms of lie detection was known as “Trial by Combat”. Physical strength was used to resolve an issue between two individuals. For example if two primitive hunters approached a fallen prey, and a dispute ensued as to whom had killed it, they would engage in combat. The assumption was that the truthful claimant would have truth on his side, and thus win the battle and own the prey.

The next development in the search for truth was known as “Trial by Ordeal”. It was assumed once again that God would intervene on behalf of the innocent individual. Although the search for truth was religious in intention, it was in fact based on a number of psychological processes. For example in China, in approximately 1000BC trial by ordeal was implemented using uncooked rice. The accused was asked to put a handful of rice into his mouth and then spit it out. If the rice was wet enough, it was easy enough to spit out, and the person was considered truthful. If the Gods made it dry, and stick to the person's mouth when he tried to spit it out, he was then accused of lying. This result however was based less on divine intervention, and more on physiological reactions to stress, i.e. a dry mouth as a result of fear of detection. 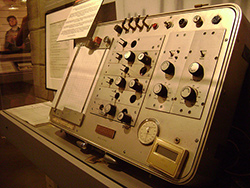 “Trial by the Sacred Ass” was a common psychologically based means of detecting deception in India around 500BC. In this test a donkey was placed in the centre of a pitch-dark tent. All the suspects were told to enter the tent and to pull the tail of the donkey. If they remained quiet, the suspect was truthful. The suspects were led to believe that the donkey was “sacred” and able to detect liars. Unbeknown to the suspects the priest would pull the donkey's tail with soot. The innocent suspects with nothing to fear would pull the donkey's tail and be covered in sot. It was then clear to the priests that the suspect was truthful. If the guilty suspect entered, he would not touch the donkey's tail, thus avoiding any chance of the donkey braying and revealing his secret. However, when he emerged from the tent with clean hands, the priests would know they had their culprit.

The following advancement in the search for truth was “Trial by Torture”. This was the primary means of lie detecting during the infamous witch-hunts and inquisitions in Europe. Unfortunately, even a truthful person would confess to a crime, given enough torture, and it was not an accurate method.

“Trial by Torture” was replaced by a more humane “Trial by Jury”, and many countries still commonly use this as the primary means of discovering truth in matter.

In the early 1890's Angelo Mosso, an Italian physiologist studied the effect of fear on the cardiovascular and respiratory systems. He developed a device known as the “Scientific Cradle” and theorized that during emotional stress blood rushes to the head. This slight change in the body's weight would tip the cradle and indicate deception. This however was never put into practice, but later used by other scientists in the development of the modern day polygraph.

The first scientific lie detector test was invented by Cesare Lombrosso in 1895. This was known as the Volumetric Glove. The subject's hand was placed in a container of water. The amount of water displaced as the subject was asked questions indicated peripheral vasoconstriction, and thus the amount of stress present.

In 1914 Benussi, a Swiss Physiologist did much research in the detection of deception using respiration rates. In 1917 Marston published a paper on the discontinuous method of measurement of blood pressure. Using the findings and practices of both scientists, Mackenzie developed a polygraph instrument primarily for physicians to monitor physiological changes in the body.

The first polygraph instrument was known as the Breadboard instrument. Which was a two-pen lie detector, developed and used by John Larson in the attempt to detect deception?

Leonard Keeler is known as the father of the modern polygraph. He not improved the polygraph invented by Larson, but introduced components that make up the polygraph, as it is known today.